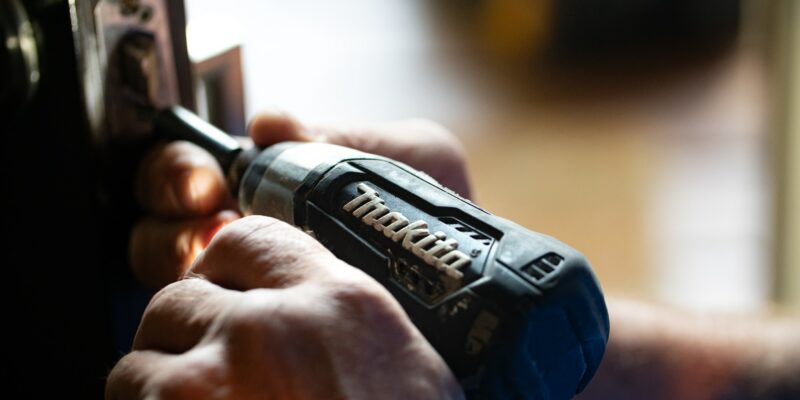 If you come across a screw without a head, it simply means someone had tried removing it and probably broke its head accidentally.

Technically, the head of the screw makes the work easier when removing the screw, whether you’re using screwdrivers or other alternative tools.

But what do you do if the head is broken? Well, this can be a real challenge, especially when you don’t have the idea of how to get around it.

Luckily, the problem has a solution. You can effectively and efficiently remove a no-headed screw by following the steps below.

Create a Tiny Hole On The Screw

Step 1: Start by creating a tinny hole on the center of the upper part of the screw, as a guide in the preparation for drilling.

This hole will help hold the drilling firm to its function. Since this is the visible, and perhaps accessible part of the screw, it can create a great starting point in drilling.

Step 2: Next up, use a drill with a slightly different diameter from the drill used to make the tinny hole on the screw.

This will ensure effectiveness by preventing the breakage of the screw. Once it’s done, use another drill with a slightly large diameter compared to the one used before.

Drills with different diameters are used since it’s not easy to make a hole on a screw using a drill with a large diameter. Stop drilling when the hole is large enough to hold a tool to remove the screw.

Step 3: Insert an extractor tool or something designed to make work easier, then, screw slowly and gently. At this point avoid being rough so you don’t end up breaking the tool or in any case the screw. T

he tool should have a rough surface that helps it to grip the interior part of the screw.

If the tool is not moved gently, it may break inside the screw, which can be another challenge altogether. Simply continue turning the tool until the screw shaft is fully out.

Step 4: In case the screw becomes impossible to remove, take the extractor tool out to prevent it from breaking inside the screw.

This is especially recommended if the screw shaft has become stubborn and impossible to remove without exacting more force.

Step 5: Drill the hole continuously to make it large until there are only threads left. This happens in case the screw has become stubborn.

Moreover, the action used enlarges the hole such that it becomes easy to remove the screw by a finger push.

Step 6: Remove the threads of the screw from the hole using a plastic pin, starting with those at the opening.

As this is the final step, it should help clean and give space for the removal of the screw. At this point, it should be rather easy to separate the screw from the material.

Meanwhile, there’s an alternative procedure that can be used to access a screw with no head.

Choices between the two procedures will be subject to what resources you have at your disposal.

Remember, it may be very difficult to remove a screw with no head using simple screwdrivers, super glue (in an attempt to increase grip), or even a rubber band. Perhaps that’s the most annoying part of it.

How To Remove a Screw With No Head: Alternatives

Ensure that you have a screw remover- this is a screw extractor designed to remove the screw with a broken head. This kind of tool makes the work easier and can be found in any store at a relatively cheap and fair price.

Moreover, they are available in different sizes, making it possible to fit the screw appropriately. They also tend to work effectively, irrespective of whether the screw has ahead or not.

Gently hit the extractor with a hammer- this is done to help push the extractor into the tinny hole you have just drilled. Press down as much as you can and later use a hammer to hit and let it fit in the hole properly. This should be done with a lot of care to avoid the breakage of the extractor.

Use a lubricant liquid – this is applicable where the screw is hard to remove even using the extractor. Allow the liquid to sit on the surface of the screw for a period before acting on the screw again. The liquid helps to reduce friction between the material and the screw. The smoothness makes it easy to remove the screw.

Hold the screw using pliers or pliers-like tools. This will help to ease the work done in removing the screw. This tool has tough threads that enable it to grasp a screw even if it doesn’t have a head. In addition, these tools are effective and strong to remove the screw.

Can You Wash a Shower Curtain With Magnets?

Can You Trim Ornamental Grasses in Summer?