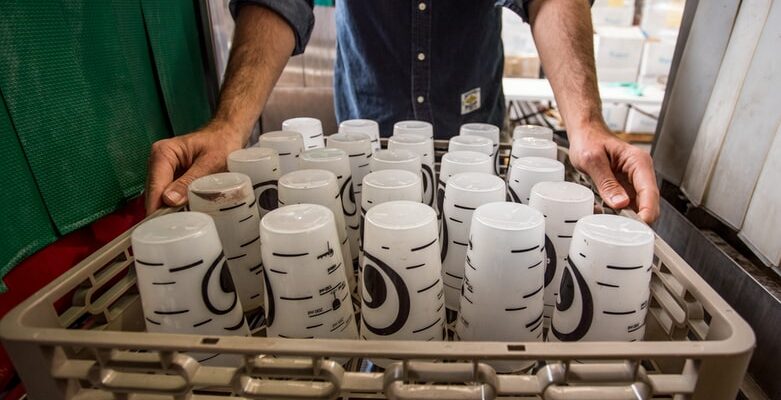 In 1886, the first dishwasher was produced, ushering in a new household convenience and commodity era.

They’re now a common sight in most American households, and they provide the same role as they did back then: they clean dishes more quickly, easily, and conveniently than individuals can accomplish by hand.

When dishwashing detergent pods were invented, an even better product was born, making using the dishwashing machine a breeze.

However, as the popularity of these dishwasher soap pods grew, so did the number of questions from customers.

In this article, we’ll address the question of whether dishwasher pods can go bad, among other questions. However, before we get started, let’s define dishwasher pods.

What Are Dishwasher Pods?

Pods are tiny capsules that hold enough concentrated detergent for one dishwasher wash cycle. These capsules are wrapped in a thin dissolvable film that dissolves in water as soon as it comes into touch, releasing the detergent inside and enabling a successful and efficient washing cycle.

Because the detergent in pods is much more concentrated than that in gel or liquid bottles, it provides a better clean while utilizing less product per wash cycle.

Polyvinyl alcohol is the primary substance used by most mainstream detergent makers for the protective film in pods. PVA is a synthetic polymer that is water-soluble and shelf-stable.

Using this polymer to coat the outside of a dishwasher pod allows the user to store the detergent in a cupboard and utilize these convenient pods knowing that they will only dissolve when they come into touch with water.

Dishwasher pods do not expire. However, they can lose their efficiency after 12-15 months, depending on the brand. It’s recommended to avoid leaving the dishwasher pods to sit for this long because a less efficient pod won’t clean as well as you’d want.

Reasons Not to Store Your Dishwasher Pods for Long Durations

They Become Less Effective With Time

Dishwasher pods, in general, will lose their effectiveness over time. This is why anyone who wants to know if dishwasher pods can go bad should start here. The dishwashing pods will still work if you preserve them for over a year, but they will be less effective.

When it comes to what you’re utilizing the pods for, this is a serious worry. It’s better to make sure you’re using brand-new dishwashing pods for this job. You’ll be sure that the pods will function as claimed, and you won’t have to worry about them not doing a good job of washing the dishes.

When it comes to the question, “Can dishwasher pods go bad?” It would be best to keep in mind that the pods are physical objects that can be moved around.

While they will not expire, if you are not careful, they can quickly be wrecked. This involves structural breakdown as soon as they are exposed to the environment.

It is preferable to keep them for a short time at room temperature in storage space. This will ensure that when you remove the dishwashing pods, they are ready to use. Otherwise, you can end up with something that has a ding or isn’t shaped the way you want it to be.

When it comes to the question of “Can dishwasher pods go bad?” This is important since it affects the pod’s effectiveness.

What is the most important thing to you? You’ll want to wash the dishes, but the scent is also essential!

The fragrance enhances the overall cleaning experience, and it is only possible with newer dishwasher pods. Otherwise, they will not function as you expect and will disappoint you.

Each year, the scent will deteriorate by about 10%-20%, making it critical to use it as soon as possible.

Do Dishwasher Pods Clean Better Than the Regular Dishwasher Detergents?

Before the introduction of dishwashing pods, detergent was previously available in powder, gel, and detergent tab form. While cleaning dishes, all three of these work well. However, in houses with hard water, the powder may have a slight benefit over detergent tabs and gel pacs.

Hard water causes limescale deposits on glasses, resulting in white patches, streaks, and cloudiness. The degree of hardness in the water directly impacts the operation of a dishwasher, and in locations with extremely hard water, the powder may provide better results because it permits the user to regulate the amount of detergent used.

Are Dishwasher Pods Safe to Use At Home?

The bad news is that dishwasher pods are not safe to use at home. They might cause more harm than benefit. The exterior package is the deceiving component that makes one pitch for the dishwasher pod.

Since PVA is water-soluble, it dissolves when it comes into contact with water, making dishwasher pods more desirable. The pods are also small in size, making it easy to store them and already come in doses, allowing you to use them without measuring.

Unfortunately, there’s more to it than that. To begin with, not all dishwasher pods are eco-friendly. As a result, they will harm the environment while purporting to assist you in dishwashing.

Second, if you get PVA on your skin or in your eyes, it’s just as unpleasant as the dish detergent inside, requiring mild washing and flushing with cold water.

Third, children can easily digest these pods, leading to poisoning and death in the worst-case scenario. If it can cause death, how safe is it as a product?

Bleach, formaldehyde, 1,4 Dioxane, ammonium sulfate, and ammonium quaternary sanitizers are among them, all of which are detrimental to the environment and human and marine life.

Do Nightstands Have To Match Dresser