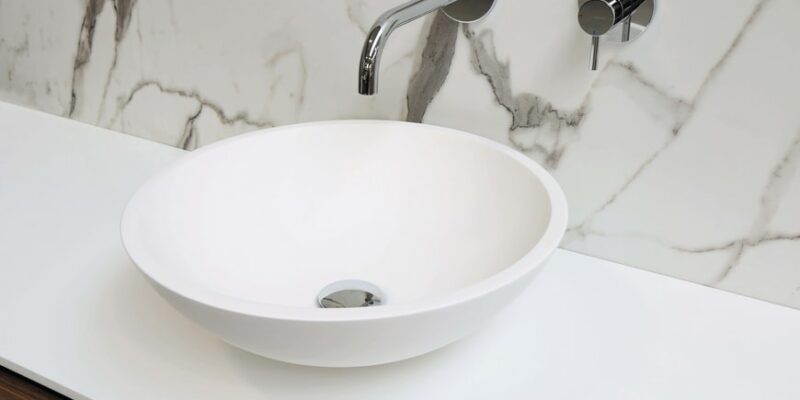 Why Does My Bathroom Sink Smell Like Rotten Eggs? This is a question a number of homesteads are always grappling with.

Staying in a family home full of go and a well-used bathroom can easily conjure up a few interesting smells.

Lots of things can get stuck in the bathroom or kitchen sinks, and when they start to decompose, it can bring about a horrible rotten-egg smell.

In this article, we shared the various easy and very effective solutions to resolve the problem.

But first, discuss some of the reasons why your bathroom/kitchen sink smells like rotten eggs.

What Causes the Smell?

A smelly bathroom/kitchen sink is usually caused by bacteria build-up from grease, fat, and food, which have been flushed down the drain.

These often get stuck in the pipes and end up creating sulfur- to be specific, hydrogen sulfide gas that causes the unpleasant rotten egg smell.

Note that it’s not the water that smells bad. The odor is more likely caused by bacteria in your drain.

When you turn on the water, it forces gas out, making it seem like the water caused the smell. But it’s not actually the water you are smelling; it’s the gas. In case the water smells or tastes like sulfur, it’s usually a sign that you need to clean your pipes.

In bathrooms, such smells can also be caused by stray hairs that tend to line in the drain after becoming lodged in soap scum.

In sewers, the absence can be produced when, without oxygen, microbial organic matter breaks down and emits an awful odor. That’s why it smells so bad.

How to Know Where The Smell is Coming From

Trying to pinpoint where exactly the sulfur smell is coming from can be a real challenge.

If you want to figure it out, you need to conduct a small test. To determine if the problem is in the water or in the drains, simply get a glass of water from the drain or area you perceive the smell to be.

Take the glass outside and smell. Then check the water from another spout and take it out to smell.

If both glasses of water have smell awful odor, then it means that the bacteria are the water. Meanwhile, if only one glass smells, it most probably means one of the drains is contaminated.

After testing where the smell is coming from, the next thing is to find out if it’s limited to that particular source or it’s all around the home. If you found water to be the source of the odor, check the water in other fixtures in your home.

If the smelly water is only from that one sink, it could be a localized plumbing condition. Odor building bacterial may be thriving on those pipes. If the smell exists in other faucets, the contamination is likely to be in the supply.

Where the smell is limited to the drain, it could be contaminated wastes pipes or blocked vents- this is particularly the case where the smell increases after flushing the toilet or emptying the washing machine.

So, How Do You Stop Sink Drain From Smelling

To keep your sink from smelling, you’ll need to clear any blockages which are causing the odor. Below we’ve discussed the various methods for clearing the drain and getting rid of that awful rotten egg smell.

Pour some boiling water down the drain. Wait for around five minutes and then pour an equal amount of cold water.

This should push any remaining grease to congeal and hopefully clear the blockage and so the smell.

This is yet another easy and inexpensive way to clear your bathroom sinks. Pour a cup of white vinegar down the drain, and leave it for 30 minutes. Then rinse with hot water.

You can also clear a smelly drain using a plunger. Just place the plunger cup over the basin drain and pump vigorously up and down for a couple of minutes to eradicate any small blockages.

Caustic Soda contains fantastic degreasing properties, making it ideal for breaking down grease and fat, which are usually the most common causes of a blocked drain.

To unblock a sink using this method, we’d recommend using a solution of around 10 percent.

You can create this by simply dissolving 100g of Sodium Hydroxide crystals into 1 liter of water. Pour the solution down the drain and leave it for around 30 minutes so it can break down any deposits in the sink.

You may, however, consider running some water into the sink, to increase the water pressure.

If you’re not satisfied with the results, repeat the process of creating a solution and pouring it down to the sink until the drain appears to be clear. Moreover, Caustic Soda can be used to properly unblock outdoor drains, plug holes, and toilets.

If neither of these methods resolves the issue, it could be that there’s a blockage in the u-bend of your sink.

Also known as waste pipes, u-bends are found underneath the plughole of bathroom basins and baths. U-bend wastes tubes are usually filled with water to prevent drain odor from escaping.

The easiest way to clear an obstructed u-bend is to remove any blockages from it.

To do this, carefully remove the u-bend pipe using a wrench and then empty the contained water.

With the help of a wire brush and a flush of warm water, any remaining residue can be easily removed.

How To Prevent Your Bathroom Sink From Smelling

The best way to avoid a blocked sink is to be careful as to what you put down your drain.

Be sure to take regular actions to clear any deposits that might form. Also, make sure you don’t pour grease down the drain.

You may want to opt for waste with hair-catching properties to prevent hair soap scum and such solids from making their way into the drain.

With the above tips, you can determine the source of the smell, get rid of it and prevent the development of odor-building bacteria in your bathroom/kitchen sinks.

In case of persistence, it might be worth seeking professional advice from a plumber as the problem could be external rather than internal.

Smoking In Bathroom With Shower Running