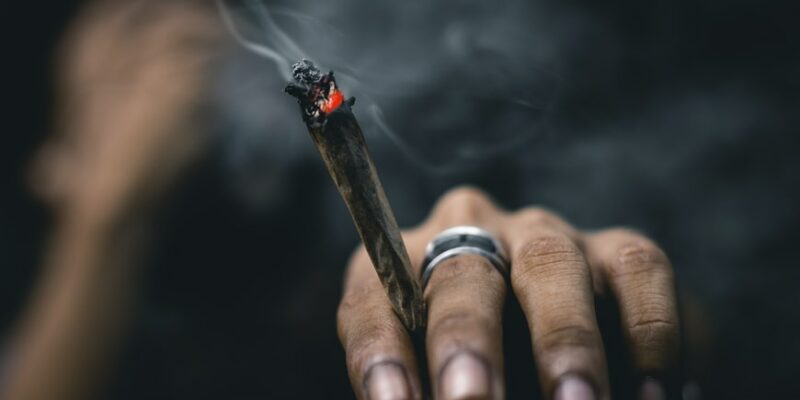 If you find yourself in a place where you shouldn’t be smoking, and heading outside isn’t really an option, then the shower can be a great place to slip a toke.

Well, there are other ways to conceal the smell, but the shower method is often considered the most reliable and easiest to pull off.  The steam and a running ceiling fan can provide a punch to combat the smell.

Moreover, if there are some people out there that you don’t want to know you’re smoking, your prolonged absence in the bathroom comes with its cover story, you were simply taking a shower.

So without further ado, here’s a complete guide to smoking in the bathroom with the shower running.

Note that organization is key, especially where time is limited. So prepare your joint, bong, bowl, or any other smoking device before heading into the shower.

This will help keep me calm and possibly get a little extra buzz out of it.

Put a Towel Under the Door and Close any Vents

This will help keep the smoke from taking on other parts of the building. Putting a damp towel into the crack at the bottom of the bathroom door will help prevent the smell from creeping out as well.

This also serves to cover up the smell pretty good if you’re in a place such as a hotel or a dorm room where you want to smoke and don’t want to get caught.

Simply stuff a towel under the door and leave the shower on for a few minutes afterwards. All these are meant to help catch the smoke and condense it to something rather unsuspicious.

Turn the Hot Water on As Hot As It Goes

The point here is to get the room as steamy as possible. When you get into the bathroom, turn the shower on all the way hot. You might want to give the shower at least five minutes to steam up the room.

Of course, it’s a waste of water but the final effect is awesome. The steam from the hot water will alter the smoke and help dissipate the smell.

Turn On the Bathroom Fan

This might seem counterproductive to the steam/smoke mix you just build up, but it’s necessary. The fan will help suck up and carry the smoke and any odor out of the bathroom.

f the bathroom has a window, open it. You don’t really have to open it all the way, but you can prop it open about six inches.

This will make the smoke and steam condense together as it leaves the room. Having done that, light up and enjoy your session.

Get Rid of Any Leftover Residue

If you don’t want to store any remnants such as jointed end in your pockets- probably due to the smell, then the toilet is probably the best option.

Check that you’ve thoroughly cleaned any device such as a pipe or bong. Also, consider leaving the water running and keep the fan or the window open to help get rid of excess smoke.

Indeed you went to great lengths to put your smoke session out of sight. Nonetheless, to keep your cover story intact, you will need to take a shower. This will help remove any lingering smell from your body.

By the time you finish the shower, the smoke and odor will have dissipated and you’ll be good to go.

If you’d like to take this even further, go ahead and spray a bit of air freshener. But make sure you’re not overdoing it- avoid anything more than you would for a standard odorous bathroom trip.

Additional Tips on Smoking in Bathroom with Shower Running

While the above steps are quite plenty, there’re some extra steps you can take if you want to be extra careful to mask the smell during your session.

This might be absolutely necessary if the consequences would be dire should you get caught.

Think about losing your rental or getting kicked out of an essential program.

Use a Sploof During Your Shower Session

A sploof is basically a funnel designed to help control and contain the smoke. It acts almost like a cheap air filter.

For a simple DIY sploof method, take an empty toilet paper roll and stuff it full of drier sheets. Toilet paper can work in a pinch but not as well.

Then cover one end of the tube with another drier sheet (or toilet paper for that case). You can then secure it with a rubber band or a hair tie.

Exhale Into The Tube

When you exhale, try to do so into the tube. Most people have such supplies at their disposal and when you’re done, you can disassemble it easily.

Still, if storing a balance of your joint isn’t an issue for you, getting yourself a reusable sploof can be a great idea.

The most common option is the Smoke Buddy Personal Air Filter.

Get a Bathroom Air Filter

Given that bathroom is usually a place where a tad extra scents reduction is appreciated, small outlet-plug air purifiers can go a long way.

These models can be a bit expensive, but if you’ll be smoking in the shower regularly, they can give your bathroom fan a helping hand in ensuring the smell doesn’t escape your private place.

The best way to eradicate the smell when smoking in the bathroom is to get rid of the smoke.

Vaping, though a relatively new option in the smoking world, serves agreeably for discreet smoking. There might be still some smell, but it won’t be as strong as it would be if you were smoking.

Combined with other techniques discussed here, you can rest assured no one will smell what you’re vaping.

Check that the vape you choose is designed for the task. If you try to vamp something like a flower with the wrong rig, or when you’re not sure what you’re doing, you could ruin your device, waste your weed and even hurt yourself.

How To Clean Up Shattered Shower Door

Why Does My Bathroom Sink Smell Like Rotten Eggs?