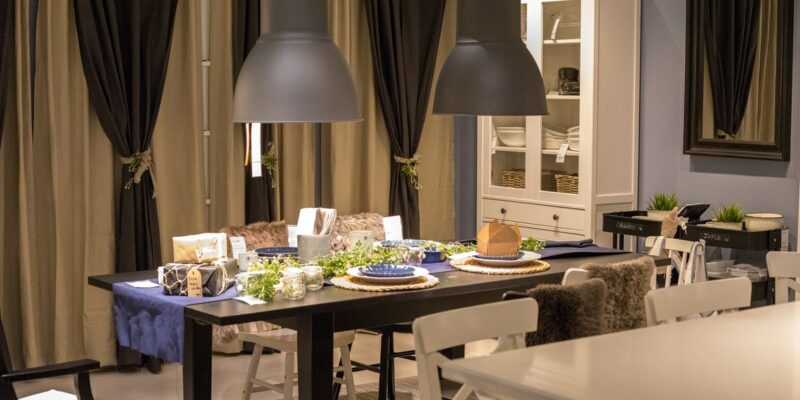 Both wafer lights and can lights are types of recessed lights. The lighting fixtures for recessed lighting are placed in a space or cavity in the ceiling.

Wafer lights are sometimes referred to as can-less lights because they do not have the ‘pot’ or ‘can’ housing that can lights come with.

Recessed lights are a type of lighting first invented in the 1940s by Ivan Kirlin.

Since then, recessed lights have undergone an extensive metamorphosis and become very popular.

The greatest selling point with recessed lights is their energy efficiency. They mainly use LED bulbs which save up to 60 percent of energy.

The other attraction with recessed lighting is the placement. They appear to be part and parcel of the ceiling making the room seem larger and spacious.

The disadvantage with recessed lights is the permanence.

This means it is not practical to replace them often which leaves little room to install more elaborate designs such as would be possible with pendant lighting which allows for an extensive array of chandelier and lampshade options.

Wafer lights Vs Can Lights: Which is better?

That said the two are suited to different spaces.

It would be rather wasteful to place can lights in rooms that require little lighting such as storage and parking spaces while a reading area, the kitchen, or the family room should absolutely have can lights instead of wafer lights.

Can lights come in two variations; new construction recessed lights and remodel fixtures. Both of these versions come with the can housing or a ‘pot’ hence the name.

Wafer lights do not have the can housing and are easily fixed from below regardless of whether the building is new or old.

If you are looking into installing either, below are the factors you will need to consider.

Can lights come in an array of trims for you to choose from. New construction lighting fixtures in particular have plenty of trim options in terms of design and even colors.

The bulbs as well, which are a significant component of the light fixture come in various shapes, sizes, and colors.

Wafer lights have small trims which means that if you decide to install wafer lights you will not find an array of trims to choose from.

Wafer lights do not have a wide range of brightness.

While can lights can accommodate a very extensive range of brightness settings, wafer lights tend to limit brightness to a significantly lower range.

Some newer wafer lights have increased brightness range but they do not compare to can lights in terms of brightness and range of color.

Wafer lights do not distribute light as effectively as can lights do. Depending on the model, can light housing can reflect light further across a room creating wider beams.

Wafer lights tend to focus the beam to a narrower circumference which could end up supplying light poorly.

Wafer lighting must be carefully considered and placement must take into account this fact.

Wafer and can lights both last very long compared to traditional lighting fixtures such as pendant lights. If external damage is avoided, the fixtures themselves are highly durable.

The LED bulbs in wafer lights well tend to last a considerably long time without needing replacement. Recessed lights have been known to offer anywhere from 50,000 to 100,000 hours of useful light.

Can lights are much harder to install than wafer lights. New construction lights require ceiling access and the remodel fixtures also need the services of an electrician to install.

Wafer lights can be fixed across joists with the help of simple fasteners or clips which make it easy for anyone to install them.

Unlike can lights, they will not need to be nailed into the frames of the ceiling. Since they do not come with an electrical box or junction box, they connect directly to your wiring and they are ready.

Can lights have standardized fittings which means every fixture on the market can be installed the same way.

Wafer lights have no standard fitting which means you must replace a former light with one that is compatible.

With can lights, you only replace the bulb if it is not working.

If a wafer light has grown too dim, you have to replace the entire fixture which is a slightly higher expense.

Regardless, installing and replacing wafer lights is a straightforward process compared to fixing can lights.

Bulbs used in can lights need replacing should they burn out.

Wafer light LEDs do not burn. Instead, they grow dimmer with time until they can no longer provide sufficient lighting.

With both can and wafer lights, energy consumption is rather low but wafer lights consume even less than can lights.

In general, it will cost more to buy, install and run can lights than wafer lights.

New construction can lights in particular are quite expensive in the initial installation but they do offer much better lighting.

Wafer lights cost less but it may be necessary to install a number of them to sufficiently light up a space. The cost may not be as much of a benefit also, given the limited range of brightness they offer.